Welcome to Season Five of NightBallet Press!  The season, or year, officially began in September of 2015 and will continue to September, 2016.  We traditionally begin the new season with the publication of an anthology containing new poems by the poets published  the previous season.  To continue this fine tradition, we are very pleased to announce the release of Lipsmack! A Sampler Platter of Poets from NightBallet Press Year Four 2015.  If you think the title is a mouthful, just wait until you sink your teeth into the delicious nuggets of poetry contained within! 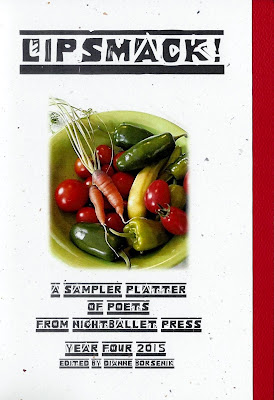 Lipsmack Year Four contains 16 new poems of moonlight communion, the Terminal Tower and Mountain Dew, of allegory, beauty, illusion and fear, of a singing bird, a red-eyed bull, a yellow lotus and endless, foreign blue, of Joan of Arc and the Big Gulp, of shoegazers and moonbeamers and coat pockets sewn up, of instant cinéma vérité and overheard conversation, cranberries and juice jars, and ekphrastic ice cream...the shape of dreams by these outstanding poets:

You can get your very own copy of this delectable serving of poems for only $5 plus $3 shipping by buying it through PayPal right here, or you can find it on Amazon!  Order Lipsmack Year Four here:


NBP will be producing one book a month for Season Five, and we are excited that we've already published September's book:  Beat Attitude by John Burroughs!  You can read about it and then order it here:

NightBallet Press has set the table, everyone's welcome, and mouths are watering...so smack those lips...and dig in!