The Generation of Forms by D. R. Wagner!

NightBallet Press is excited to announce the publication of The Generation of Forms,
a new book of poetry by D. R. Wagner! 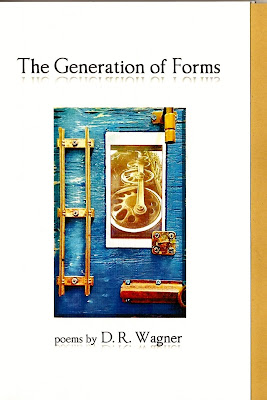 The Generation of Forms boasts a cover photo of a striking art piece by Ohioan Kevin Eberhardt, the coloring of which is complemented by a heavy, goldenrod-colored cardstock insert.

The book contains 23 poems printed in Century Old Style font on 36 crisp, white, textured pages, matching the white textured cardstock cover. The intriguing titles of the poems reach out and pull you to them with blue-eyed wonder: "An Epiphany of Circumstance" and "The Generation of Forms" and "Fog Fog Fog" and "Touching My Bones" and "In the Rigging: Tears Began to Fall."  Wagner's landscapes call forth tales of glory and heartache, of grace and storm, of giants and birds. In "The Fire Chairs," Wagner writes

The ends of my fingers burst
Into flame.  One, two, three,
Four, five.  I stand outside the house.

The giant storms have begun again.
They walk on legs made of lightning,
Thousands at a time.  The night stinking
Of ozone and the wettest of heat.

And in "Guided by Voices," he writes

Burned into the flesh
But never showing as brands,
Cold sparks coming from the mouth
Like a child's friction toy.

We sit inside our skeletons,
An electricity of energy flowing through us,
Firing desire, rooms of actions and reactions.

Wagner guides us through his rooms, gently holding our hands but never allowing us to turn from the terrible beauty of seas and seasons, of flame and fog.  And in the end, we "find love bursting from every heart."

The Generation of Forms is available now, for only $10 plus $2 shipping!
(For orders outside the U.S., please contact us at nightballetpress@gmail.com)


Come, get yourself some D. R. Wagner today!


D. R. Wagner is the author of over 30 books of poetry and letters.  He co-wrote The Egyptian Stroboscope with d. a. levy in the late 1960s, and read with Jim Morrison of the Doors in a legendary reading with Michael McClure.  He has also read with Lawrence Ferlighetti, Al Winans, Anne Waldman, and many, many other poets over the last 40 years.  His work is much published and has appeared in numerous translations.  He has exhibited visual poetry with the likes of William Burroughs, Brion Gysin, bpNichol, and John Furnival in venues ranging from the Musée des Arts Décoratifs at the Louvre, Paris, to the Smithsonian in Washington, D.C.  He is also a visual artist, producing miniature needle-made tapestries that have been exhibited internationally, and are included in numerous publications and museum collections.  He is, further, a professional musician, working as a singer-songwriter, and playing guitar and keyboards.  He currently plays and sings with the band Some Time Tonight. 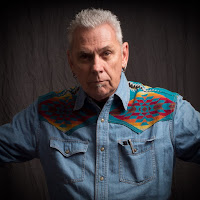 photo by Glenda Drew, used with permission
No comments: