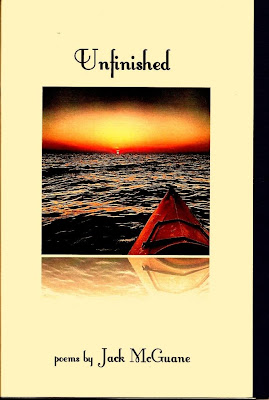 That's right, NBP has just published Lakewood, Ohio poet Jack McGuane's chapbook Unfinished.  But don't worry; you won't miss a thing, because although the first poem in the book is titled "Unfinished Poems", all the poems are finished!

Unfinished is 28 pages long and contains 18 poems that explore an 86-year-old's philosophical questions and topics from the smell of elephants to the predictability of a potluck, from rebirth to relevance to "arriving in Cleveland from the east coast".

Featuring a stunning photo taken by Cleveland photographer Michael Spear, the cover is an ivory cardstock with a royal purple cardstock insert.  The text is printed on a thick, creamy white paper.  With additional photos taken by Ohioan Shelly Brewster, the chap is both visually pleasing and intellectually stimulating.

Jack McGuane, a treasure among the Ohio poets, has been a resident of Lakewood, Ohio since 1974, when he moved there from New York's Long Island.  He served for three years as poetry editor of Whiskey Island Magazine, won the Haiku Death Match (sponsored by Cleveland Heights Arts), and was named Poet Laureate of Lakewood 2006-2007 by a board of judges and by proclamation of the Mayor.  His poems have appeared in various journals and anthologies, and his collection of poems Chickenhawk was the first-ever chapbook to be published by NightBallet Press.

Unfinished is available on Amazon-  or get your copy, here, now!