Innocence May Be Transitory... But Eberhardt Shall Endure!

NightBallet Press is pleased to announce the publication of yet another poetry chap this merry month of March!  To celebrate St. Patrick's Day, we present Transitory Innocence by Cleveland-area poet Kevin Eberhardt! 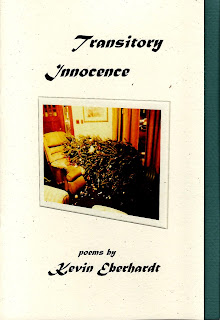 KE's poetry sucks you in, gives you a good licking, and then releases you to ponder the ecstasy. Each of his poems in Transitory Innocence is a microcosm of teeming life under the microscope of his eye. Once you've experienced him, you'll be begging for more.  Here's an example:
a scent of humor


Kevin Eberhardt is a northern Ohio poet who retired at the first of last year (2012) from one life into the next. He has been writing poetry since high school some 40 years ago. Lately, he's tried his hand at found/primitive/folk art; this has consumed most of his time. His poetry has appeared in ArtCrimes, The City Poetry, the Deep Cleveland Junkmail Oracle, the Fuck Poetry anthology (Crisis Chronicles Press, 2011), and the Cartier Street Review. His chapbook Burnin' Shadows was published by Crisis Chronicles Press in 2011. You can explore more of his poetry and see examples of his art at http://octoberconspiracy.blogspot.com.

Transitory Innocence boasts a cover photo taken by John Burroughs, seen here with Kevin Eberhardt at the 100 Thousand Poets for Change event in Elyria, Ohio, in September of 2011: 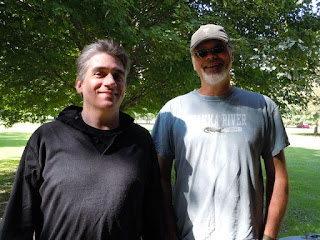 Transitory Innocence is  32 pages, with 25 poems.  The cover is a thick, creamy cardstock with a deep aquamarine cardstock insert.  There's a photo by Chandra Alderman on one of the text pages.  KE's poetry is pure gold...on this St. Patrick's Day, get lucky and buy yourself a copy!  Available now on this website (through PayPal) for only $5 plus $3 shipping and handling! 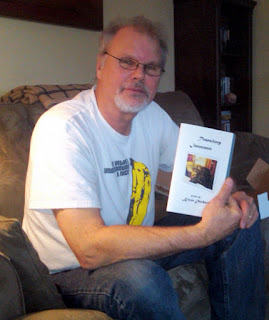 Brand(t) New Chap - and you'll be Reaching for It!

One of Cleveland's dedicated founders of the Arts scene in the Tremont neighborhood is also one of its finest poets, and NightBallet Press is delighted to present her Brand(t) new chap of poetry!

That's right, Jean Brandt's debut collection of poetry, Reaching for It, is officially published today, and is ready for you to...well, reach for it! 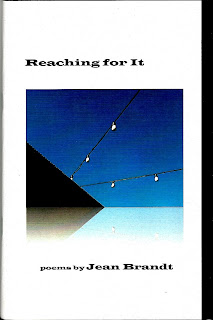 From "The Importance of Smiling" to "Hood Bitch", and from "Santaland and Other Utopias" to "Brain Jam",  Brandt's poems will poke you in the ribs, dap you on the shoulder, and give you new insight into the everyday workings of a well-defined Cleveland neighborhood.  Her unflinching look at relationships, social politics, and the evolution of her surroundings draws you into her world, where things might not always be pretty, but they're always honest and real.  You will often find yourself breathless as with a punch to the gut after reading one of her three-line, haiku-form poems, as she's a master of the succinct.

Reaching for It is 52 pages long, and contains 47 brilliant poems.  The chap has a textured white cardstock cover, with a textured deep chocolate brown cardstock insert and is printed on creamy white paper.  It can be yours today for only $5 plus $3 shipping/handling- simply order through PayPal on this website.  Or if you are in the Tremont neighborhood of Cleveland, Ohio, swing by and check out the Brandt Gallery on Kenilworth, right across from the Visible Voice book store, and reach for a signed copy from the poet herself! 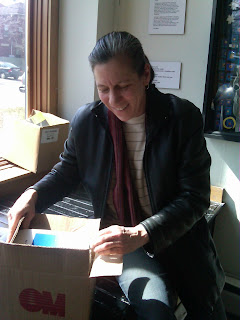 Big congratulations to J. E. Stanley—his poem "Random Facts About Halley's Comet" has been nominated for the Science Fiction Poetry Association's prestigious Rhysling Award!  This is his sixth nomination for the Rhysling, and NightBallet Press wishes him all the best this year.  You have our votes!

It just so happens that J. E.'s brand new chapbook, Selected Regions of the Moon, features that very poem, "Random Facts About Halley's Comet", as its centerfold... and NightBallet Press is extremely pleased to announce the publication of this chap! 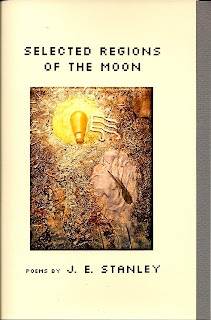 Officially published on February 15, 2013—International Asteroid & Meteorite Day  (aka "Duck and Cover Day")—Selected Regions of the Moon is released today 03-03-13 for public consumption.

(NBP wishes to thank poet J. E. Stanley for being incredibly patient through interminable delays in the actual printing of all the copies of his chap.  NBP is now back on track and back in business!)

Selected Regions of the Moon is a speculative fiction (think "science fiction") themed chap, and many of the poems in the chap speak of the Moon, asteroids, apocalypse, and a universe that's somehow...different... from the one we know.  In J. E. Stanley's masterful hands, these poems of speculation and science become exotic moonflowers that open just for us, drawing us in with their alien and elusory scent.  Once you've traveled into these pages, you won't want to come back to Earth!

J. E. Stanley is an accomplished poet, and has been widely published in both genre and mainstream journals and anthologies.  He is author of Dark Intervals (vanZeno Press), Dissonance (Deep Cleveland Press), Rapid Eye Movement (Crisis Chronicles Press), and co-author, with Joshua Gage, of Intrinsic Night (Sam's Dot Publishing- you'll need to scroll down the page quite a bit at the Sam's Dot site).  His work has appeared in Amaze, Asimov's Science Fiction Magazine, Cinema Spec, the Deep Cleveland Junkmail Oracle, Paper Crow, The Rhysling Anthology, Scifaikuest, Sein und Werden, Star*Line, Sybil's Garage, and numerous others.  "An accountant and on again/off again guitarist from the grayscale suburban wilderness of northeastern Ohio, he continues to assert that, winged or not, Man was always meant to fly; the moon and stars were just put there as incentives."

Selected Regions of the Moon contains 32 poems and scifaiku, and is 40 pages long.  Housed in thick creamy ivory cardstock with a moon-gray cardstock insert and printed on soft ivory paper, it features stunning cover art by Lady Smith.  The photo used is from a series of photos of a collage piece she's working on entitled, aptly, "Moon".  Lady explains "...it as it means something about the power of the feminine spirit via the moon & sparkling illumination. The light bulb shape is from packaging from an LED bulb. Also have a feather in there representing a bird as participant, protagonist, observer of light or primary character. The texture on it is partially made up of leaves in order to bring more of Nature into the piece."

This chap is available beginning right now here on the NightBallet Press website, with  the easy payment of $5 plus $3 shipping and handling through PayPal, or you can see the poet and obtain (if you're reeeeeally niiiiice to him) a signed copy at the Deep Cleveland reading next Friday night (March 8, 2013).  One way or another, get a copy of Selected Regions of the Moon, and begin your journey into Stanley's Universe! 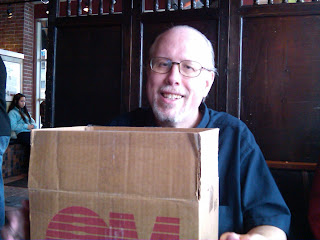 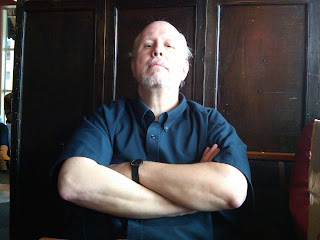 NBP has received links to or copies of some extraordinarily well-written, thoughtful, and positive reviews this past couple of weeks.  John Burroughs' first full-length collection The Eater of the Absurd was reviewed by Ra Washington, Erren Geraud Kelly's debut chap Disturbing the Peace was  reviewed by John Dorsey, Andrew Rihn's The Hunger Dictionary was reviewed by Heavy Feather Review, and Chansonette Buck's debut chap blood oranges was reviewed by Victor Schwartzman.  Please link to these reviews and check out what others have to say about this excellent poetry!

And be sure to stay tuned for announcements concerning the publication of Kevin Eberhardt's Transitory Innocence, J. E. Stanley's Selected Regions of the Moon, and Jean Brandt's Reaching for It.  All three chaps are in current production, and barring unforeseen incident, will be available by this time next week, March 8 (and maybe sooner)!