Can We Be Frank(e) With You?

NightBallet Press is enormously pleased to announce the publication of Christopher Franke's new chap, As the Caffeine Kicks In! 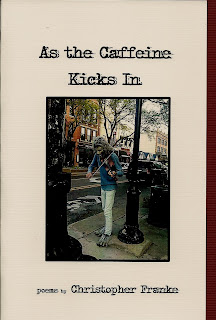 Christopher Franke is something of a legend in the Cleveland area.  He has been an integral part of the Cleveland, Ohio poetry scene since the early 70s, and has been widely published.  His unique poetic voice shines through clearly in the poems collected in As the Caffeine Kicks In.  Utilizing agrammatical punctuation, neologistic spellings and puns, varying font sizes, and a stunning vocabulary, Franke expresses his views on religion, politics, the economy, society, ecology, the writing life, growing older, and love in a way only he can do.  This editor feels his poems are nothing short of genius.  Known for his unflagging support of poetry venues, and for passing out his and others' poems at readings, Christopher Franke continues to enrich the poetry community in Cleveland, and beyond.

As the Caffeine Kicks In is 56 pages long and contains 30 poems.  The cover is a pale ivory cardstock with a coffee-brown cardstock insert.  The text of the poems is printed using Goudy Old Style, the poet's preferred font, on soft, creamy ivory paper.  At only $5 plus $3 shipping/handling, this book is a must-have.  NBP promises you, you won't be able to put it down once you've begun exploring the World of Franke! 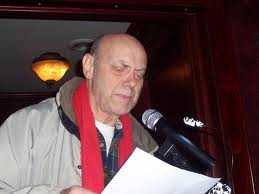