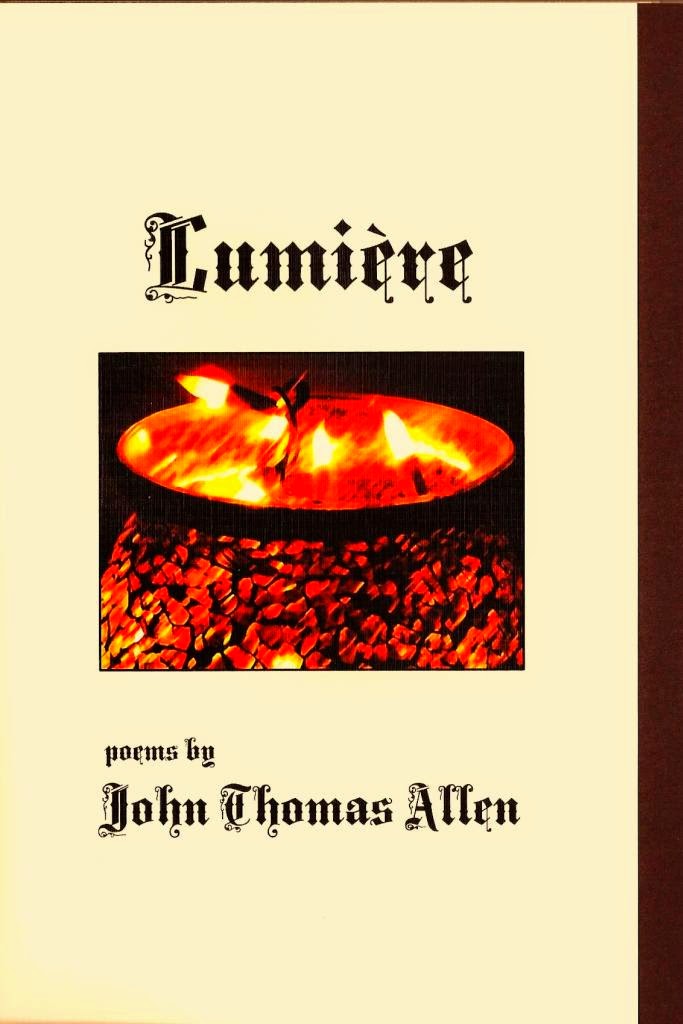 Lumière, a 56 page book, contains 40 poems that are, in the poet's words, "a hybrid of orthodox surrealism and spiritual transcendence".  Of Allen's work, it has been said:
"The soul is conscious in this new voice, and John wears a rosary around his neck. Real as Albany, his infra-surrealism is growing and growling."


“The work of John Thomas Allen reflects a mature, distinct and unique poetic voice.  There is an unusual courage of insight and clarity into what many of us would rather look away from.  Enjoy this young poet’s itinerant voice.”


Julian Semilian, author of  Osiris with a Trombone Across the Seam of Insubstance, Transgender Organ Grinder

John Thomas Allen, a 30 year old poet from upstate New York, is the head of a group of poets called "Noveau's Midnight Sun" inspired by the work of Andrew Joron, Philip Lamantia, David Shapiro, Adam Francis Cornford, Lee Ballentine, John Olson, and Will Alexander.  His previous chapbook The Other Guy is avail from Amazon and Crisis Chronicles Press.

One of this editor's favorite poems in Lumière is "The Virgin Is Burning Under the Sign of the Hourglass":

In the hourglass
her waistband undone
In the earthquake her hands
clap above ground wax cartoon gloves
In a gold sepia dream she is spinning
In wax oysters spat red with hue she is turning
In the aeons of the dying swans skirt is the timekeeper
In the chambers of a child's handgun
she turns
In the hourglass she burns a cap of midnight vapor she steals it
In the clown's silver eyes she turns the lock
In the magnet balls she gyrates Salve
Salve a twinkletoe geometry is born
In the skirt of basketball nets she crochets new diamond
Salve the Virgin Burns
In the Sign of the Hourglass Breaking
Salve the hexes of a lonely werewolf's cry she turns the volubles
She spins in the moon pale with corduroy buttons
in the clown's funeral suit
She burns in vignettes of black sand and deep purple smoke machines
Salve, combustus in bytes of chiaroscuro
Salve, moonlight maiden she locks the lunar hatchets in the dead yo yo
Salve, combustible maiden!

Lumière is available for only $10 plus $4 shipping and handling, through PayPal here on the NightBallet Press website, and also on Amazon.  I just know that Salvador Dali would be standing in line for this surrealist Voice.  Get your copy today!