John Dorsey Is Responsible for the Fall of the Ramen Empire!

It's true, I tell you!  NightBallet Press has learned that John Dorsey is responsible for the Fall of the Ramen Empire! 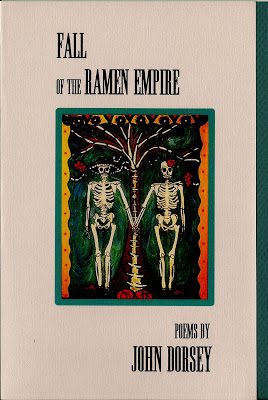 ...and what a resounding fall it is!  Fall of the Ramen Empire is the latest chapbook by the one and only John Dorsey. His fourteen poems of longing and remembrance, of wonder and wisdom, fill this 20 page chapbook with a haunting beauty.

S. A. Griffin, co-editor of The Outlaw Bible of American Poetry and contributing writer for The Underground Guide to Los Angeles says of John Dorsey and Fall of the Ramen Empire:

"John Dorsey is simply one of the best wordslingers on the scene, a small press legend in the making. In his ghost world of the Ramen Empire, lovers pray to Godzilla under crumbling drive in signs for clean sheets as the moon shines down upon the beautiful madness that is John's poetry.” 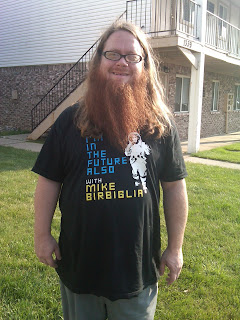 John Dorsey holds a BFA in Writing for Film & Television from the University of the Arts in Philadelphia.  His short "Buffalo Diamonds" was made into a full feature independent film by producer/director Chris Lance of Paladin Knight Pictures.  He is the author of numerous collections of poetry, including Teaching the Dead to Sing: The Outlaw's Prayer (Rose of Sharon Press, 2006), Sodomy is a City in New Jersey (American Mettle Books, 2010), Leaves of Ass (Unadorned Press, 2011), Street Maps for Lost Souls (Crisis Chronicles Press, 2012), and White Girl Problems (NBP, 2012).  His work has been nominated for the Pushcart Prize.