Monsters! Whimsy! What more could you ask for?

When both Mary Turzillo and Geoffrey Landis sent manuscripts to NightBallet Press, we couldn't resist the opportunity to release the books of these two dynamite  poets simultaneously, as a Big Bang at the end of NBP's fourth season.  Therefore, we are ecstatic and excited to announce the publication of


A Guide to Endangered Monsters by Mary Turzillo
and
The Book of Whimsy by Geoff Landis! 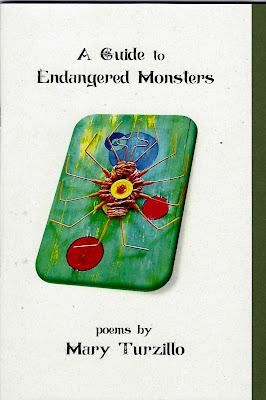 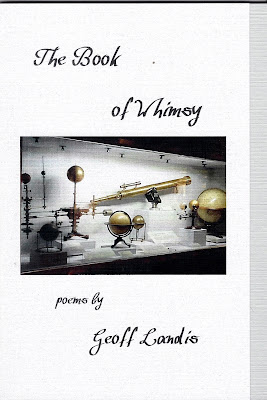 These books are full of secret things, wondrous things, whimsy, and yes, monsters both physical and metaphysical.

Mary Turzillo's A Guide to Endangered Monsters is packed with many of her award-winning and most-popular poems, everything from the deliciously salacious "We Made Poetry" to the devilishly hysterical "Aesthetics of Evil"...and including some of her haiku

Wandering teacup
Where has the mistress left it?
Ah. Wandering mind.
...and some of her science-fictional, apocalyptic pieces rendered in the way that only Turzillo can do it:

(stanzas excerpted from "This Is Just to Say")

This is just to say
I have eaten the hadrosaurs
that were grazing in the meadow
and which you were probably saving for further evolution.
Forgive me:
they were so tender and juicy
and also noisy;
they made my teeth itch.

This is just to say
I have blasted a crater
the size of Hyperion
in the Yucatan peninsula.
Forgive me:
it was so green and fertile
and it was in my way.

The Book of Whimsy by Geoff Landis is subtle and profound, whimsical and witty, with poems such as "Ode to My Lover's Small Intestine" and "Sending My Mother to Mars."  A master of various poetic forms, Landis uses pathos, humor, and often, deft rhyming to write poems that grab you by the shirt collar and pull you in close for a kiss.

Those wistful roses
still blooming in November:
I think they're plastic.

I have to shout.

I have to shout
inside my head
to drown out the voices
of sanity and reason.

I have to shout
inside my head
to drown out the voices
of sanity and reason
so I can reach the madness.

I have to shout
inside my head
to drown out the voices
of sanity and reason
so I can reach the madness
in which genius is hidden.

The Book of Whimsy contains 44 pages of 39 poems, with the text printed on bright white paper.  The cover is a textured white cardstock, with a cerulean blue-gray textured insert.

The Book of Whimsy and A Guide to Endangered Monsters are $10 each, with postage and handling charges of $4 each.  But buy both books together for $20 and NBP will pay the postage!  What a powerhouse team!  And Mary says there are some poems in Geoff's book that even she has never seen before!

Select the PayPal button of your choice below, and get the books of this powerhouse team for your very own!  Soon to be available on Amazon, too! 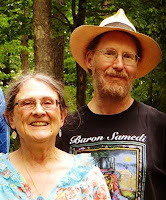 Mary Turzillo's 1999 Nebula Award winner for Best Novelette "Mars Is No Place for Children" and her Analog novel An Old-Fashioned Martian Girl are recommended reading on the International Space Station.  Her poetry collection Lovers & Killers won the 2013 Elgin Award.  She has been a finalist on the British Science Fiction Association, Pushcart, Stoker, Dwarf Stars and Rhysling ballots, and Sweet Poison, her Dark Renaissance collaboration with Marge Simon, was a Stoker finalist and is on the 2015 Elgin ballot.  She's working on a novel, A Mars Cat and His Boy, and lives in Berea, Ohio, with her scientist-writer husband, Geoffrey Landis.  Find her at www.maryturzillo.com.

Geoff Landis is a writer, scientist, and poet.  He has won the Hugo and Nebula Awards for Best Science Fiction, and has twice won the Rhysling Award for Best Poem.  As a poet, he has published several hundred poems in magazines and anthologies ranging from The City to 3Lights: a journal of micropoetry to The Year's Best Fantasy and Horror.  His poetry chapbook Iron Angels was published in 2009 by VanZeno Press.  He is also the author of the novel Mars Crossing and the story collection Impact Parameter (and Other Quantum Realities).  As a scientist, he works for NASA on Mars exploration, and on developing advanced technologies for spaceflight.  He lives in Berea, Ohio, with his wife, poet Mary Turzillo, and four cats.  More can be found at www.geoffreylandis.com.

Best deal!  Get both Guide and Whimsy for only $20 with free shipping!


(*Publisher's note: All of Kevin Eberhardt's art, including the one pictured on Turzillo's book, is for sale; if interested please contact Dianne Borsenik at NightBallet Press for details.)