Buck's Unfinished Litany: Incantations for Transience, from the Cul-de-Sac!

NightBallet Press is very pleased to announce the publication of unfinished litany: incantations for transience, from the cul-de-sac by Chansonette Buck! 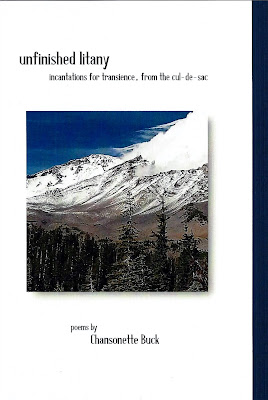 unfinished litany: incantations for transience, from the cul-de-sac is a deeply personal,  autobiographical story, told through beautifully crafted narrative poems, of a year colored by cancer.  At times, the colors are the darkest indigo, the deepest gray; at others, the colors shine with the warmth of yellows and greens.  But through it all, strong spirit and love of life triumphs, as Channie Buck fights to own herself again.


unfinished litany: incantations for transience, from the cul-de-sac contains 40 pages of 30 poems, printed on snowy white paper.  The white textured cardstock cover features a stunning photograph of the poet's spiritual touchstone, Mount Shasta, taken by the poet.  The cardstock insert is a deep royal blue, echoing the blue of the sky in the photograph.  Together, the colors indicate the turbulent storms of cancer diagnosis and surgery, and the clean, clear acts of survival and triumph.

"Chansonette Buck has taken life itself as her subject, its pain and pleasure, darkness and light, failures and successes, and created poetry of impeccable timing, rhythm and grace. She has used the eye and heart of an artist to make the personal into the universal. These poems will stay with you long after the last page is turned. Chansonette has a magnificent gift and a heart generous enough to share it with us. This is essential reading, highly recommended."

"Chansonette Buck is observant: searching, reflecting, ultimately allowing her observations to come on their own terms. These are poems of serenity and patience, but they are not without their anguish and regret-the story of a woman grappling with the wounds of former women whose bodies she inhabited but did not carry forward.  Her triumph comes in the slowing of time into moments lived deliberately, broken down into still smaller frames that extend what is painfully acute to a more sustained tempo of sounds, time slowed.  In subtle beats of living, time becomes the spent petals in the "unfinished world" whose sounds outlast us and whose buds and berries will indeed cycle and ripen-no longer for us, as they have never been for us-and in our own way, we cope with that indifference.  At times, we cope with serenity and a calm grace and at times our invocations come as the cautions of the "crawdad cassandra" signaling our own imminent end, and that of the world at large." 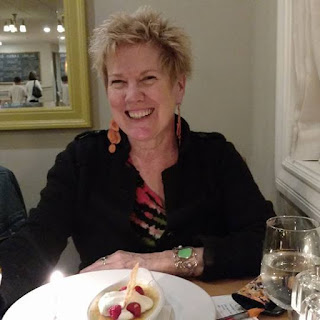 unfinished litany: incantations for transience, from the cul-de-sac is available for sale, beginning today, May 17, 2016, for only $10 plus $4 shipping/handling.  You don't have to be a member of PayPal to use the PayPal button; all you need is a debit or credit card. Order your copy today, and find out what "incantations from the cul-de-sac" Channie performed to be the strong, beautiful, joyful woman she is today!